Walter & Zoniel’s work deals predominantly with the human relationship to the sublime, manifesting in a dynamic range of physical and immersive forms. Through these means they explore everyday access points to the sublime, and the manner in which we allow or disallow ourselves these experiences

Their studies materialise in works exploring our relationships with nature, the cosmos, the cellular, the social, identity, and awareness.

Through a conceptual and innovative process-based practice they often expand or develop entirely new processes in order to create their artwork.
Working in a spectrum of artistic mediums primarily conceptual process photography and large scale installation. These practices often expand to include painting, sculpture and video. Their artwork is at the same time metaphoric, literal and narrative.

The artists regularly use their processes of production of physical works, as a means to narrate a story or exhibit a conceptual metaphor, particularly in their photographic practice. Every element of their process and completed artworks are bound together with equal relevance, allowing the viewer multiple access points whilst implicitly reflecting upon the metaphysical nature of their studies.

Through immersive installations they playfully utilise fun and surrealism as tools to access deeper layers of their subject matter, inspiring viewers to engage in further explorations of their own.

Both Walter and Zoniel have practiced art since childhood. They started their joint practice as 'Walter & Zoniel' in 2014.
​Walter was born and raised in the heart of London. The urban landscape was his favorite and most comfortable domain where he would create installations in the street. Wandering the concrete complexes of his locality at night and responding to the terrain and the mentalities that he came across, he would create pieces to inspire thought within his peers placing them publicly to be stumbled across in the day.  Inspired by the workings of the universe he focused his interests in the studies of science and Nebular theory before teaching himself photography.

Zoniel was born by the sea and raised in the hills of North Wales. Early life illness inspired a deep fascination with the capabilities of the human mind and its perception, which grew into a desire to capture and represent those things through the arts. Seeking out a means to further explore this fascination, as a teenager she renounced her worldly belongings and moved to a Tibetan Buddhist Monastery where she studied meditation and Tibetan arts under the guidance of a Master Artist and many High lamas.

Their work weaves their outlooks together uniting their individual takes on the analytical and the ethereal.  Their joint energy fuels further creation and their practice in itself acts as a vessel to push the expansion of their understanding. ​​Through their meditative processes of creation, which is often deeply physical, they have developed their own unique techniques that focus upon the cyclic nature of existence, embodying the human condition as much within their process as in their finished artworks. Their work merges experiences from both of their scientific and Buddhist backgrounds driven by a commitment to deeper exploration of the mind and universe and genuine formats with which they can express. 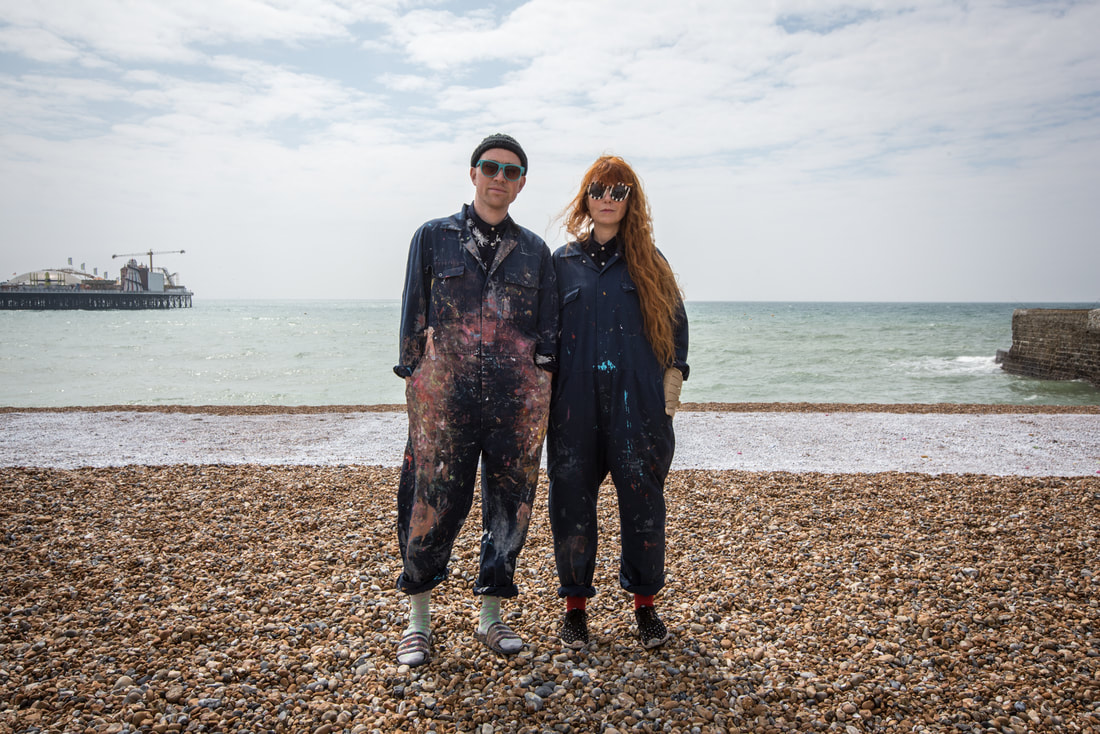